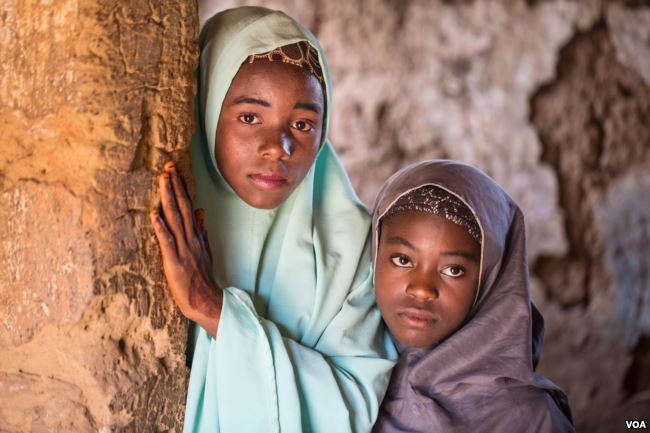 In a village in northern Nigeria, teen wives gather on mats spread out in the dirt just outside the chief imam’s home. They talk about their initial reactions to getting married.

“I had no interest in it at the time. I was just doing my own thing. Marriage was not on my mind until when God wished it was time,” says 16-year-old Fadilah Bello. She’s the boldest of them, talking freely and coaxing on the others.

“Well, of course you would be nervous or scared. You cry on your way to your new home because you are leaving your parents and you don’t know where you will be taken to,” said Sahura Misbahu. She got married three years ago. She thinks she’s 15; she doesn’t know her husband’s age. 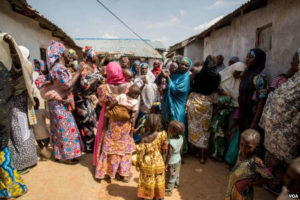 “Had it been I had a choice, they should have given me a year to graduate from school but since this was what the parents wanted, I had no other choice,” says the 15-year-old chief imam’s daughter, Aisha Ahmed.

Nigeria has the largest number of child brides in Africa, according to the U.N. Children’s Fund. The practice is most prevalent in the predominantly Muslim north where conservative Islamic groups staunchly resist efforts to criminalize child marriage. Most girls accept whether they want to or not, but times are changing.

Women in a village outside of the Kaduna State capital celebrate ahead of the marriage of 14-year-old Basira Bello to 30-something year-old Salihu Amiru.

“We are seeing more and more girls running away from child marriages,” says Hajia Rabi Salisu, the founder of Arrida Relief Foundation and owner of a children’s home in Kaduna.

She and other activists want states in the north to criminalize marriage before the age of 18. A prominent activist, Salisu says her advocacy has put her at loggerheads with Muslim groups and she regularly receives death threats.

“I sleep in a different home almost every night because my life is at stake simply for trying to protect the lives of children”.

Rahmatu Ibrahim and Naja’atu Abdullahi, both 14, didn’t know each other few months ago. But their similar circumstances brought them to Salisu’s children’s home.

“I was being forced into an arranged marriage,” said Rahmatu. “That was why I ran away. I don’t love him and I don’t know him. I had never seen him before. A date was set and a day [before] the wedding, I ran away.”

Naja’atu, whose parents watched her leave, wants to focus on her education.

VOA met Sumayya Musa in another village in Kaduna State. A sprightly 18-year-old student, she has defied the expectations placed on her by the community.

“My father wanted me to get married when I was 13, but my mother said no, because she was in support of my decision to further my education,” she says. “People here in this village laugh at me because I am not yet married. They gossip and sometimes I used to cry. But the moment I remember the advantage of my studies, I stop crying.”

Nigerian lawmakers have been debating marriage customs for decades. The federal 2003 Child Rights Act mandates that both parties be at least 18 to marry, but it’s left for states to ratify the act and most of the states in northern Nigeria have not.

Muslim rights groups have been meeting with northern state lawmakers to express their concerns. Some activists propose a minimum age requirement of 15, but the idea offends Awwal Tesleem Shittu, a member of the Muslim Lawyers Association of Nigeria. 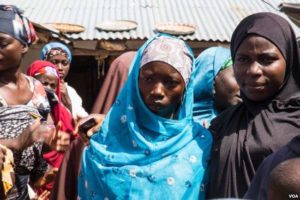 He says that according to Islam, a girl’s readiness for marriage cannot be determined by her age.

Fourteen-year-old Basira Bello (with blue hijab) is escorted by a female relative to the home of her soon-to-be husband.

The Quran specifies that girls can marry once they reach age of maturity, which some conservative scholars define as puberty, while other Muslim communities and scholars accept 18 as the age of maturity.

The #ChildNotBride hashtag began trending in Nigeria in 2013 after a senator and former governor, Ahmad Sani Yerima, was accused of marrying a 13-year-old. Yerima denied the accusation but declined to reveal the age of the girl in question. Yerima also supported a legal amendment to consider any married girl, regardless of age, an adult before the law.

The 2014 case of a 14-year-old girl in Kano who admitted to killing her 35-year-old husband with rat poison again brought child marriage under scrutiny. Police said the girl’s father forced her to wed. The murder charges were eventually dropped.

Rights activists say it is poverty, not religion, that drives parents to marry off their young daughters.

“They just want to take these girls off their hands as fast as possible,” said activist Mustapha Wakil, who notes that economically disadvantaged parents have been accepting unusually low dowries – as little as 3,000 naira, the equivalent of $8. Parents used to demand at least 40,000 naira, or $112.

Wakil is campaigning for his state of Yobe in northern Nigeria to pass the federal Child Rights Act because he says the current state statutes on marriage are confusing, in particular clauses differentiating betrothal and consummation.

In a village outside the Kaduna state capital, 14-year-old Basira Bello, is preparing for her wedding. She’s a shy one, but she managed to say that she’s excited because all of her friends are already married.

He wants to have children as quickly as possible; he’s hoping to have many daughters.

As for the runaways, Rahmatu and Naja’atu, they just want to hold on to their childhoods a little while longer. They are attending school and hope their families will one day forgive them for running away. 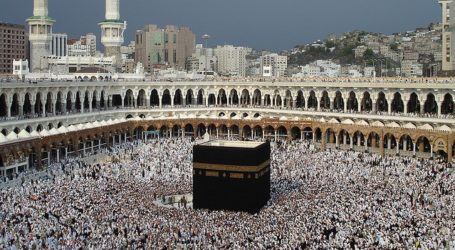